The Venture Bros. is a comedic animated television series that both parodies the original Jonny Quest series and includes Jonny Quest characters in some episodes.

The Venture Bros. is a homage and parody of Jonny Quest. The setup of the main characters parallels the original Quest Team:

The pilot episode has several moments that parallel the original Jonny Quest series. The Venture team flies in a Dragonfly-like plane and the team is seated exactly as the Quest team sits in the Dragonfly, and this scene is featured in the opening sequence. The opening also features a spider-like robot, similar to Dr. Zin's robot spider. 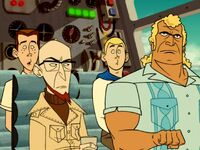 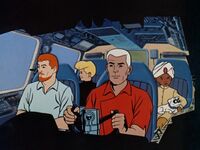 Quest Team in their plane the Dragonfly in their series opening

Race Bannon is mortally injured while on a mission with the Office of Secret Intelligence. Brock Samson, an old friend of his, finds him and holds his hand while Race dies, and Race's last words are to tell Jonny he loves him. Brock completes Race's mission.

Jonas Jr. and the Captain go to the submersible Quest Bell One looking for a needed component, and they're surprised to find Jonny Quest - in his underwear, paranoid, holding a gun, and surrounded by pill bottles. The Captain convinces Jonny that Jonas Jr. is a doctor who can write him any prescription he needs, and Jonas Jr. plays along.

The Doctor is Sin

Rajni calls Jonas Jr. from the office as Johnny is having a breakdown behind him. Rajni doesn't know what to do, but his wife will leave him if he brings Johnny to the house again. Rajni says that Johnny is "like a brother" to him, reminding Jonas Jr. that he has his brother Rusty on the other line. At the mention of Rusty, Rajni jokes, "Has he asked you for money yet?" Jonas tries to transfer over to Rusty, but Rusty's left his phone. Rajni says, "Shit, did he hear us?"

The Invisible Hand of Fate

In a flashback from the agency, Red Bannon steps out of a room, covered in blood. Behind him in the room is a man tied to a chair, where Red has obviously been torturing him for information.

At "Rusty's Day Camp for Boy Adventurers", Action Johnny is a featured guest. He has his own booth where he signs "baby pictures" of himself, which appear to be an eleven-year-old Jonny Quest. Action Johnny also appears on stage and speaks to the crowd, but he goes on a rant about his issues with his father and he has a breakdown on stage. Brock mentions that he liked him better when he was strung out.

Dean later gets Johnny's autograph, and Johnny tells him that if he "just says the word" he'll get Dean out of there because he doesn't need to live like that. Johnny is later upset that the program says he has a special guest star. On stage, Dr. Z arrives and tells him to give "Uncle Z" a hug. Johnny breaks down and is taken away, and Dr. Venture tells Dr. Z that Johnny's "been clean for a month" but he's been "downing xanax like they're cheetos".