Official synopsis from the back cover:

Quest Team gets real in a hurry when a hi-tech computer virus invades the Internet. Press the picture keys to hear six awesome action sounds and the real voices of Jonny, Hadji, Jessie, and Bandit. Join them in this all-new adventure against an army of destructive cyberbots!

Jonny, Jessie, and Hadji are racing cybercycles in QuestWorld. A virus infects the Quest Compound systems, creating life-size robots that begin emerging from the circuits in the walls. The robots begin devouring machinery, and they infect QuestWorld and go after the trio's cybercycles. They kids log out of the QuestWorld.

Meanwhile, Dr. Quest and Race are in another part of Quest Compound, trying to stop the virus. A distress call comes from Commander Bennett at the Pentagon, where the virus has also attacked. The Pentagon can only hold off the virus from their reaching their military computer core for 12 hours.

The kids meet up with Dr. Quest and Race, and fight off the robots. Dr. Quest tells Jonny and Jessie to reach the mainframe and find out where the virus came from while he, Race, and Hadji hold them off. The mainframe is intact but it's a mess, but Jonny figures out that the virus "came in over the internet from someplace called Spinnerets in Manchester, England."

The Quest team takes the Catalina plane. Dr. Quest tells them that Spinnerets Software Company invented the OneWorldWeb, and he's "heard rumors they've been working on some new computer warfare projects", such that would take down computer systems and render a country powerless, which the these virus-created robots effectively do. During the trip, Jonny works on a cure for the virus.

They get to the Spinnerets compound and drop in from the plane. Jessie "rigs a tracking device to find the computer that sent the virus." They get to the room and find a kid at the computer station. The boy is Eddie, son of Sir Edward Butler, a world-famous computer programmer. Eddie apparently played on his father's computer and booted up a program he thought was a game, but then he couldn't get it to stop.

Jonny plugs in his portable QuestWorld computer and sends the anti-virus he was working on. It wipes out the virus, and the robots at the Pentagon self-destruct. The military computer core is safe.

The Quest Team heads back to the compound on the Catalina. Jonny asks if they others are up for some more cybercycle racing, but Hadji points out that they have many repairs to work on at home, and Jessie is beat from the long trip. Jonny jokes that if she's coming down with a virus, "QuestWorld could have the perfect cure" for her.

The book has a panel on the right side with ten buttons. Pressing on a button will play the unique sound associated with it. The buttons are: 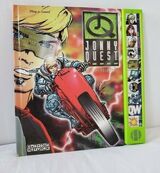 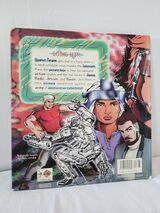 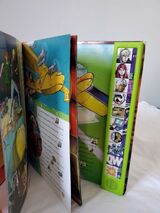 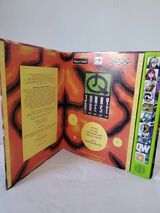