Jonny Quest Wiki
Register
Don't have an account?
Sign In
Advertisement
in: The Real Adventures of Jonny Quest, Toys and merchandise

A Jonny Quest toy line was released in August 1996 by Galoob to correspond with the release of the 1996 television series The Real Adventures of Jonny Quest.

Descriptions from the back of the boxes:

In a chaotic world, where madmen plot to melt the polar ice caps and tigers roam free on the streets of New York, Jonny Quest is on a mission to set things right! From Siberia to the Serengeti, travel with Jonny and his intrepid globe-hopping crew. Or take a techno-trip to the virtual reality universe of Questworld and help fight to save the world from parallel-world plunderers and virtual aliens. Get real and create your own action-packed Jonny Quest adventures!

GET REAL! Get ready to take a techno-trip to the world of Jonny Quest™. We're presenting a hot new toy line based on the all-new animated series from Turner Home Entertainment and Hanna-Barbera. Jonny Quest™ and his globe-hopping Quest Team will take you on exotic adventures all over the map, from Siberia to cyberspace. The 1996 Jonny Quest™ toy line from Galoob includes figures and vehicles from the Real World and the virtual reality realm of QuestWorld™, a cyber universe of light and shadow where anything is possible. Our 5 Real World Collections include 2 fully articulated, highly detailed and decorated 3.5"-tall action figures per pack, along with lots of great adventure accessories and features. The QuestWorld™ Collections include a clear, fully articulated, 4"-tall QuestWorld™ action figure with a light-up QuestWorld™ vehicle, clip-on armor and spring-fired weapons. To transport the Quest Team across the globe, we're introducing the Quest Rover™, Quest Porpoise™ and QuestWorld Cyber Copter™ vehicles. They're all loaded with plenty of action features and spring fired weapons, and carry any 2 Jonny Quest™ figures inside.

Take a techno-trip to QuestWorld™ at the official website for Jonny Quest™. Check out episodes, bios and adventures. You can even chat with others about your favorite members of the Quest team!

The following is a list of sets released for the Jonny Quest toy line.

The following are toys in the Jonny Quest Real World Collections toy line. All sets were released in August 1996 with an approximate retail price of $9.99.

The following are toys in the Jonny Quest Questworld Collections toy line. All sets were released in August 1996 with an approximate retail price of $12.99.

The following are toys in the Jonny Quest Real World Vehicles toy line. All toys were released in August 1996 with an approximate retail price of $16.99.

The Jonny Quest Questworld Vehicles toy line consisted of just one toy. It was released on August 1996 with an approximate retail price of $24.99.

In June 1995, Galoob announced that they had won the license from Turner to release Jonny Quest toys, and that they would launch a line of action figures and other toys for the new series.[2][3][4] This was part of a "$100 million-plus marketing and merchandising drive for the new The Real Adventures of Jonny Quest".[5]

The toys came out in the fall of 1996, corresponding with the release of The Real Adventures of Jonny Quest television series.[6]

In 1997, Galoob discontinued its Jonny Quest toy line – along with all its male action toy lines – to focus exclusively on its Star Wars toys.[7]

The toy catalog was released with the Pizza Hut Quest Packs. 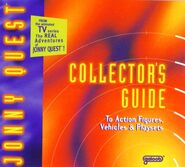