The Mummies of Malenque is the first episode of the second season of The Real Adventures of Jonny Quest, and the twenty-seventh overall.

Race: "Ah, come on, Estella. Couldn't you find a less dangerous place for a mother-daughter vacation?"
Jessie: "Dad."
Race: "I come to pick up my daughter, my ex-wife has lost her and I find her chin deep in quicksand."
Estella: "I just love it when you play the over protective papa, Race. I suppose you've never taken her anywhere dangerous."
Jessie: "Mom."

Hadji: "Now, if we could just avoid those thugs and their mummy-snatching employer, perhaps we can..."
Jonny: "Avoid them?! I wanna find out exactly what this doctor is up to."
Jessie: "I'm right behind you, Jonny. Coming, Hadji?"
Hadji: (sigh) "Why am I always out voted?" 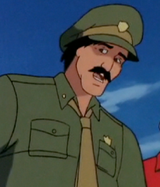 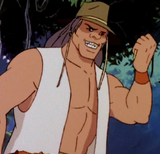 Plague contained in a round-bottom flask

Colonel Salazar's tattoo
Add a photo to this gallery

Retrieved from "https://jonnyquest.fandom.com/wiki/The_Mummies_of_Malenque?oldid=11075"
Community content is available under CC-BY-SA unless otherwise noted.