Jonny is chosen to guide an elephant to its sacred resting place, before two poachers kill it first.

Dr. Quest: "Before you even ask your next question, the answer is no."
Race: "The elephants' graveyard, Benton. Jonny could prove it really exists."
Dr. Quest: "That is not a job for a thirteen-year-old boy, and certainly not for my thirteen-year-old."

Jessie: (to Jonny) "If you go tramping across the Serengeti alone, the only graveyard you'll find is yours. Either we go with you or..." (to Hadji) "You talk him out of it."
Hadji: "The paradox of karmic fate is the razor's edge between predestined reality and active choice."
Jessie: "I guess that means we're going with you."

Jonny: "How can we have lost him?"
Hadji: (laughs) "Only you could lose an elephant." 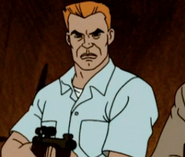