While getting ready to test a new diving bell, Dr. Quest gets an urgent call from Washington asking him to help locate a sunken atomic submarine.

Jonny is reading Jules Verne's 20,000 Leagues Under the Sea aloud to Bandit. Dr. Quest invites Jonny to join him and Race to use his diving bell.

They head out in the Sea Quest, a research ship, heading for Lost Canyon to test the diving bell. They name the diving bell The Nautilus, inspired by Jules Verne.

They get an urgent call from Washington. An atomic sub ran into trouble and the crew had to abandon ship. The crew is okay, but the sub sank, and the government needs the sub located. Dr. Quest agrees to take a look.

At the approximate location of the sunken sub, Dr. Quest, Jonny, and Bandit descend in the diving bell. Jonny has fun looking out the porthole at the fish, and asking questions. They turn on the outside mic to hear the fish, turn on the flood light to see outside better, and Jonny uses the intercom to speak with Race up on the Sea Quest. They reach 6,000 fathoms, which is a new record. Dr. Quest turns on the sonar scope and sees something large and moving out there. They turn off the flood light and it leaves, heading up toward the surface. They turn the flood light back on and locate the lost sub. Dr. Quest reports up to Race that the sub is broken apart, and he's detecting some radiation coming from the ship. Race reports seeing a large sea creature surface, and they hear attack noises and Race stops responding. Jonny suggests they surface, but they can't because Race handles the controls of the diving bell.

As their oxygen levels begin to fall, Dr. Quest and Jonny try to make contact with Race. The sonar scope reads a large moving object again. They only have a half hour of oxygen left. A giant creature, possibly a giant squid, comes near them.

At 200 feet deep, the cable tangles so Race can't pull them up any further, and they only have ten minutes of oxygen left. Race gets his diving gear on to try untangling the cable, and he takes the harpoon gun. The giant squid heads back up to Race. They can see Race and the squid face off.

Dr. Quest gets the idea to send out sonar signals at different frequencies to distract the squid. It works, and Race gets away enough to hit it with his harpoon gun, and the squid swims off. Dr. Quest collapses from the low oxygen levels.

Race pulls them back up, and he and Jonny pull Dr. Quest out, and he begins to wake up.

The United States Navy arrives. The Quest team gives them the information they need to pull the sub back up, and the Quest Team heads home.

The LP release has the following tracks:

The 7" 45 RPM version only has the story parts (no theme music), and both parts have dialogue cut for time. 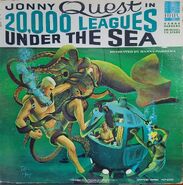 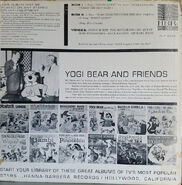 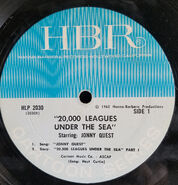 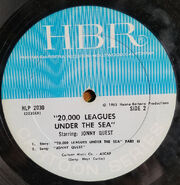 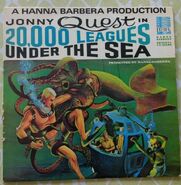 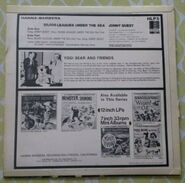 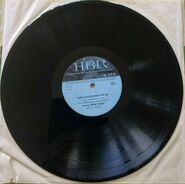 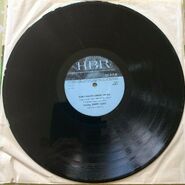 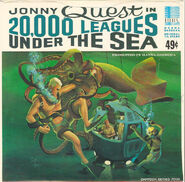 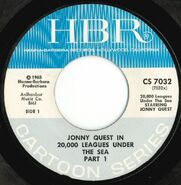 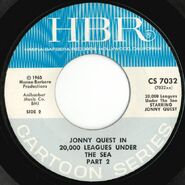