Jonny Quest: Curse of the Mayan Warriors is a 1993 DOS video game based on the Jonny Quest series.

The game was originally developed and promoted under the name Jonny Quest And The Splinter Of Heaven.

From the box's back cover:

HOLLYWARE ENTERTAINMENT in association with HANNA BARBERA brings to you the Cult Classic Cartoon, Jonny Quest. True to the television series, this game emphasises fast action and an exciting storyline.

Take off with Team Quest as they follow the trail of the stolen Splinter of Heaven. What does this ancient bit of meteorite have to do with the sudden fluctuations in the Earth’s magnetic field? Why has the Splinter of Heaven and other Mayan artifacts disappeared from the jungles of Guatemala? Is this all part of some sinister plot?

Game features include: A 3D raised perspective for exploration, an Icon controlled interface, combat sequences, a Full cast of interactive characters (including: Jonny, Hadji, Race, Dr. Quest, Bandit and others), a full soundtrack, stunning graphics, and literally hours of entertainment.

In 1988, MicroIllusions secured the license from Hanna-Barbera to make a Jonny Quest game, along with games for other Hanna-Barbera properties such as The Flintstones and The Jetsons.[1] It was intended for release on MS-DOS and the Commodore 64.[2] The game was initially titled Jonny Quest And The Splinter Of Heaven, and ads for the game ran in magazines in 1989 and 1990.[3] An early review for the game was released in The Games Machine magazine in December 1989. In January 1990, at the Consumer Electronics Show (CES) in Las Vegas, it was reported that the game was completed and ready for release. However, MicroIllusions went bankrupt later that year and the game was unreleased.

In November 1989, the article "From Cartoon to Computer" by Bill Kunkel, published in Video Games & Computer Entertainment, described the early development and plans for the game:[6]

Jonny Quest is the most straightforward, realistic title of the four licenses, a traditional dramatic adventure series with sporadic doses of comedy relief. The quest to do Quest, however, hit an early snag when Troy Lyndon's Pacific Data Works, the developers who were given the original assignment, disbanded after starting on the project. "The design spec was huge," explained Barger, who, along with Troy Lyndon and Jim Haldy, produced the original document. "We fleshed it out and Troy added text, at which point it had everything but playability. Two months later we did a new spec, and then Pacific Data Works went out of business." Fortunately, PDW's Jim Haldy formed his own company at that point and was able to pick up the baton and continue running, so the project didn't really lose too much steam.

Even so, Barger soon realized that a piece of the creative puzzle was missing, so he called in MicroIllusions' writer Curtis Norris who, along with Dave Jennings, met at Barger's home for a marathon, three-day meeting. "Getting away from the office like that really let us think," said Barger. "We all brainstormed together, and we ended up with this huge document."

"I grew up as a fan of Jonny Quest," Haldy told us, "and I wanted to recreate the idea of mystery that was so important to the show. Every show was a mystery which served as the backdrop for the adventure." In fact, Jonny Quest and the Splinter of Heaven sounds like a typical episode of the cult classic TV show. Jonny, his Indian buddy Hadji and dog Bandit take off from Dr. Benton Quest's Palm Key Island sanctum in search of the pilfered Splinter of Heaven, a meteorite remnant that seems to be causing profound fluctuations in the Earth's magnetic field. It should come as little surprise to any JQ fan that the behind-the-scenes baddie here is none other than the ubiquitous Dr. Zin, Jonny's number-one villain.

"There are three quests," Bob Shaw explained, "with the first one set in the Mayan jungles. There's a hidden temple they must find the entrance to and various objects which they can pick up along the way.” As in Flintstones, JQ offers mini-arcade sequences. Every time Jonny encounters one of the bad guys, the program toggles to an action sequence in which the user manipulates Jonny, via mouse or joystick, for a little hand-to-hand combat. "Also, depending on which objects you collect, Hadji or Bandit may help out. If you defeat the bad guys, the game returns you to the previous screen," and the adventure resumes. True to its source material, JQ is a true globetrotting adventure, with a premium on solving puzzles and getting out of dangerous situations.

While the player controls Jonny directly, Hadji follows along and assists in combat scenarios while Bandit, in typical canine fashion, is apt to go wandering off on his own. "We had no specific age group in mind when we designed this game," explained Haldy. "At the start of this project, IBM programmer Dave Jannings, who's fairly young, had no idea who Jonny Quest was." After viewing the various episodes provided by Hanna-Barbera and reading numerous JQ comic books, however, "He got addicted. Now he buys the Jonny Quest comics all the time."

JQ also employs some sophisticated conversational techniques. Jonny can maintain voice contact with his father and sidekick Race by selecting the appropriate channel on his Dick Tracy-like Wrist Communicator. There are also face-to-face dialogues featuring close-ups of the conversants with their mouths moving in perfect synch with the menu-selected dialogue.

Peter Ward, one of the game coders with MicroIllusions', described what led to MicroIllusions' bankruptcy which stalled the release of the Jonny Quest game:[7]

The story goes as follows...

Long ago, in MicroIllusions heyday... they struck a great deal with Hanna-Barbera for a bunch of their licenses. They were making games based on Johnny Quest, Flintstones, The Jetsons, and Scooby Doo. I was lead on the C64 of Scooby. Things were all looking sweet, as all the games were wrapping up. The Jetsons finished first and was released ( I'm sure you can find copies of it around ).

However, MicroIllusions made a fatal error with their product release... which would ultimately lead to the demise of the company.

Included with the Jetsons product, was a Jetsons comic book serving as instructions, and game story background. Hanna-Barbera NEVER approved this comic book, and were furious with MicroIllusions for releasing it ( they are VERY protective with their licenses! )

Ultimately, they revoked all their licenses from MicroIllisions.
MicroIllusions shortly later went bankrupt, and most of those games sadly never saw the light of day.

MicroIllusions filed for bankruptcy in 1990 and subsequently went out of business.[8]

From a MicroIllusions order catalog:

Take off from Dr. Benton's Palm Key Island for a series of adventures that will test your arcade and puzzle solving skills. True to the television series, this game emphasizes fast action and exciting storylines.

Episode One... Jetting away from their Key Palm island, the Quest team is off on another intriguing mystery in the jungle darkness of Guatemala. who is stealing the great Mayan artifacts? What secrets wait in the hidden Template of Tikal? What is the splinter of heaven?

Jonny Quest and the Splinter of Heaven possesses all the Action and suspence of the animated series. Plus you choose the course of adventure with interactive dialogue and hands on fighting sequences. The world is yourself to explore, and you will feel like you're in it as you solve puzzles and combat enemies while attempting to solve the mystery.

Episode One is just the beginning! Stay tuned for further installations in this ongoing series of stand alone adventures!

From a 1993 magazine ad for the completed game:

HOLLYWARE Entertainment in association with Hanna-Barbera bring you the "cult classic cartoon", Jonny Quest. True to the television series, this game emphasizes fast action and a unique storyline.

Join Jonny and Team Quest as they fearlessly trek through the Guatemalan jungle as they seek to solve the mysterious "Curse of the Mayan Warrior".

The game's only positive review, a score of 85%, was given by The Games Machine magazine, which provided a pre-release review of the game in 1989.

The game is especially difficult to play and complete, even for experienced gamers. In October 2018, internet gamer The Mexican Runner did an episode of Retro Gaming Gauntlet (RGG) dedicated to the game. He livestreamed his gameplay on Twitch, and after 7 and a half hours finally gave up trying to complete it, labeling it "impossible".[9] In 2019, internet gamer HipolitoPichardo livestreamed his attempt at the game on Twitch, and completed it in four sessions totaling about 10 hours and 55 minutes of gameplay. 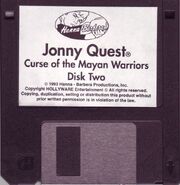 Game opening and a couple minutes of gameplay
Unboxing video
Gameplay. The Mexican Gamer spent 7 and a half hours playing the game but was unable to beat it.