Jonny Quest Wiki
Register
Don't have an account?
Sign In
Advertisement
in: Games, The Real Adventures of Jonny Quest

Jonny Quest: Cover-Up At Roswell is a computer game for The Real Adventures of Jonny Quest television series. It was released by Virgin Sound and Vision in August 1996.

In 1999, the game was re-released as The Adventures of Jonny Quest and distributed by DreamCatcher Interactive.

The general premise of Jonny Quest: Cover-Up At Roswell is that alien artifacts have fallen to Earth, and the Quest Team must find them before Dr. Surd does.

From the box back cover:

Something has crashed landed on Earth -- a satellite, according to the government. But the Quest Team knows better. Just before impact, it jettisoned several mysterious objects, and now you're racing to recover them before they fall into the hands of the evil Dr. Surd.

Hack into the top secret Pentagon security system with the Quest Droid!

Search the ocean floor in the Sea Slug, the Quest submersible.

High-speed motorcycles, bi-planes, jeeps, and you're at the wheel!

What do you do when an alien spaceship crash lands on Earth, and you realize the government is keeping the whole thing under wraps? If you're on the Quest Team, you solve challenging games and puzzles, survive knuckle-gripping interactive action sequences, and travel the entire world! You explore the Amazon, forgotten subway tunnels, the Devil's Triangle -- even cyber-space! You ward off diabolical villains, discover global espionage, and HACK INTO the Pentagon computer system....

...Just in time to uncover the secret of the alien spaceship! Jealous? Don't be. You ARE a member of the Quest Team.

The game is a single-player point-and-click adventure game. Completing the game takes about three and a half hours.[2]

Virgin Sound and Vision hosted several Jonny Quest mini-games on its website to promote Cover-Up At Roswell. Five games were released, and all ran on Shockwave.[3]

The Security System has been infected with a strange alien virus! You'll need a fast hand and sharp eyes to remove it, but hurry! Time is running out!

Description from the game page:[4]

Jonny, Jessie and Hadji are working on the computer System at the Quest Compound in Maine. Suddenly, the system crashes, and they discover weird strings of data destroying the Security System. It's an alien virus!

To restore the Quest Security System, you must light up all the symbols on the left hand panel. Groups of three symbols will appear and disappear on the right side of the computer screen. If you see one that matches a group on the panel, click on it. If it matches, the group will light up. If it doesn't match, try again.

Description of "Ancient Ruins Puzzle" on The Arcade page:

If you like pot bellies, spiky hair and flat heads, you'll love this puzzle.

Description from the game page:[5]

The Quest Team is exploring a tunnel in ancient ruins in Peru, searching for alien objects that have fallen from the sky. The Team happen upon a group of statues that are blocking their path. They notice that the different statues share something in common with the other statues, such as a pot belly, a red stripe, spiky hair, a tube shaped hat, or a flat head. On a hunch, they decide to arrange the statues in the correct pattern, in hopes that they will be able to continue their search further into the ruins.

Help the Quest Team by placing the statues on the grid in the correct pattern. The large statue in the center cannot be moved. Click and drag the other eight statues to place them in squares on the grid. Lined them up so that they share something in common in every row and every column. There is more than one solution to this puzzle.

Description of "Devil's Dare" on The Arcade page:

How are you at restoring hot water regulators at the bottom of the ocean? If you're out of practice, don't worry, we'll get Jessie on the radio to help you get through it.

Description from the game page:[6]

The Quest Team is in the Devil's Triangle trying to recover an alien object that has sunk to the bottom of the very cold ocean. Jonny, Race and Hadji venture into the dangerous water in the Sea Slug, the Quest Team's mini submarine, and communicate with Jessie and Dr. Quest by radio. To grab the object, Jonny and Race go out into the icy water, in special suits that are connected by umbilical cords to the Sea Slug. These cords supply them with air, so they can breathe, and hot water, so they won't freeze.

The magnetic forces of the Devil's Triangle wreaks havoc on the Sea Slug's controls, and causes the hot water regulator to malfunction. Help Hadji reset the numbers on the hot water regulator read-out back to, 9-8-6-1-3-7, their proper settings. To do this, click on the circuits that look like gold and silver circles to turn lights on and off.

Description of "Cyberspace Trap" on The Arcade page:

The evil Dr. Surd trapped Jonny in Cyberspace! If you don't mind silvery sludge, then this cyber lock is the challenge your looking for!

Description from the game page:[7]

While exploring in Cyberspace, Jonny is trapped by the evil Dr. Surd, the Quest Team's arch enemy. To free himself from this virtual prison, Jonny needs to figure out the secret combination of this shape-and-color lock.

Help Jonny escape by pressing the objects down in a patterned order. Click on an object and it will sink down. If you don't follow the pattern, the object will pop back up.

Description of "The Databanks" on The Arcade page:

These data bugs aren't just fast, there TRICKY! You'll need to be faster and TRICKIER. The clock is ticking on this game, so take a deep breath, AND GO!

Description from the game page:[8]

A virus has infiltrated the Quest Computer's Databanks! To remove the virus and restore the Databanks, you need to light up all the ends of the datalines while avoiding the data bugs. Move your mouse to control the movement of the white ball. When you get to the end of a dataline, the ring at the end will light up. If you can light up the other end of the same colored line without running into a databug, then the databug on that line will disappear. When you've gotten all the rings lit, you've won the game.

Virgin Sound and Vision held a Jonny Quest Valentine-themed contest in 1997. Winners' names were posted on the website, along with their age and state of residence.[9]

The All New
Jonny Quest Contest

In Virgin Sound and Vision's HOT new CD-ROM game, The Real Adventures of Jonny Quest - Cover-Up at Roswell, you and the Quest team travel the Globe on 5 secret missions to recover alien objects before they fall into the hands of the sinister men in black.

The game includes outrageous 3-D screens, awesome 2-D and 3-D animation sequences, and TONS of action! It's the most exciting adventure game to be released this year! Here is your chance to win official JQ Gear, like T-shirts, trading cards, audiocassettes, and even action figures!! from The Real Adventures of Jonny Quest!

All you have to do is send your favorite Jonny Quest character a valentine. You can send it to:

Ten each Official The Real Adventures of Jonny Quest T-Shirts, audiocassettes, action figures, and trading card packs will be awarded to randomly selected eligible participants. Winners will be contacted by e-mail.

On March 18, 1996, Virgin Sound and Vision announced the development of the game under the working title Escape from Quest World.[11][12]

In searching for a company that could best reflect via computer the exciting, multi-world adventures experienced by Jonny and the Quest team, Virgin Sound and Vision was a perfect choice. The company's creative philosophy -- namely to incorporate cutting-edge graphics, rich gameplay and enticing clues -- combined with its commitment to create non-violent adventure games suitable for pre-teen girls and boys, fits ideally with our vision of what family entertainment should be.

The game was aimed at children ages 8-12, and intended to provide 20-25 hours of game play for adults or about 80-100 hours of game play for children.[11] Tom Turpin, CEO or Virgin Sound and Vision, said, "we are excited by the limitless potential for kids to have fun and use their imaginations and problem-solving skills as they assist Jonny and the Quest Team to explore legends of the supernatural, lost civilizations, and the virtual reality of cyberspace."[12]

The game is an original story, although it repurposes footage from six episodes of The Real Adventures of Jonny Quest:

The game received mixed reviews. MacFormat gave the game an overall rating of 74%,[13] and FamilyPC gave the game a score of 87/100.[14] Entertainment Weekly gave the game a B+, saying that "anybody raised on [Jonny Quest] will get a kick out of this delightful romp."[15]

PC Powerplay called the game "another terribly average puzzler for the young ones." The Official Australian PlayStation Magazine included the game at #11 of its 1999 list of "the 100 biggest stinkers of all time" describing it as an "hilarious shoddy mix of adventure and beat 'em up that still brings a tear to the eye. And not a tear of joy."[16] 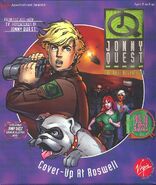 Box side with 3-D glasses 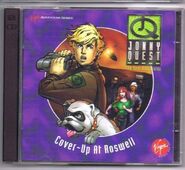 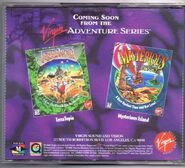 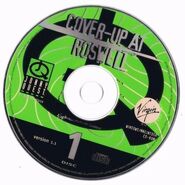 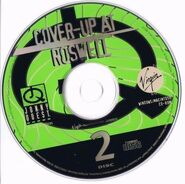 Images of the game distributed by Dreamcatcher Interactive, released as The Adventures of Jonny Quest.

Two-page ad that ran in magazines in 1996

Images used on the official Virgin Sound and Vision website.

Promotional images were available for download on Virgin Sound and Vision's website in their "Souvenirs from Space" section.[17]

Playthrough of the entire game