Jessie Bradshaw is the daughter of Dr. Bradshaw.

Dr. Zin kidnaps her as leverage to force her father to do his bidding, but she escapes and runs into the Quest Team.

Jessie and her father were kidnapped by Dr. Zin and held aboard a junk ship. Dr. Zin forced Jessie's father to do work for him to ensure Jessie's safety. But after three or four weeks, Jessie managed to escape. She happened to swim aboard the Sea Questor where she ran into Race Bannon. Jessie was being pursued, and Race helps her get away.

Jessie tells Race, Jonny, and Hadji about happened and that Dr. Zin was holding her and her father for weeks, and that it has something to do with the missile test. After the missile test malfunctions, the team is able to communicate with Dr. Quest.

Jessie tells them that there's a meeting Zin would be attending at noon, and the Quest Team intervenes, with the kids disguised as Kabuki performers. Zin captures her and the Quest team and holds them aboard his ship. Jessie gets the idea to have Bandit steal the keys from their sleeping guard. They escape with Jessie's father aboard a speedboat.

Afterward, they say their goodbyes aboard the Sea Questor. Jonny admits that he was wrong about her and that she was "really professional." He offers her friendship, and she gives him a kiss on the cheek.

Jonny: (while the team is locked up) "Let us handle this, Jessie, we're professionals."
Jessie: "Yeah, you're doing a great job so far."

Jonny: "I was wrong about you, Jessie. You were really something when we needed you. Really... professional."
Jessie: "You weren't so bad yourself."
Jonny: "Friends?"

Plans for the character

Jessie was intended to be a recurring character, as someone who knew Jonny from when they were little from their fathers' association. Neither of these came to fruition, in part because the series was cancelled after thirteen episodes.

From an interview with Mark Young from Cartoon Files Magazine Spotlight on the Jonny Quest Files when the series was still in pre-production:

The new series will also bring in a new female character. But while she will be recurring, she won't be in each and every episode.

"She's a young girl who is the same size and age as Jonny," Young explains. "Her name is Jessica Bradshaw, but at this point her last name might change. The back-story on her is that Dr. Quest and Dr. Bradshaw went through undergraduate college together and Dr. Bradshaw is an equally brilliant scientist. He has this little girl named Jessie and she and Jonny would play in each other's laboratories when they were growing up because their fathers were such good friends. Jonny never liked her because he always considered her kind of silly and whiny. They just never got along too well.

"Dr. Bradshaw sends an urgent message to Dr. Quest saying that he has to leave the country and to please take care of Jessie for him. Jonny complains but Dr. Quest goes, 'She's the daughter of one of the most brilliant scientists in the world. Surely, after all this time, some of that has rubbed off on her.' Just then the door opens and there she stands with a zebra striped suitcase and a Cyndi Lauper-esque hairdo. But beneath that she truly is a brilliant young woman and probably has an IQ several points higher than Jonny, but she doesn't show it all the time. As she joins them in their adventures, she'll come out with these bursts of brilliant deductive reasoning. She knows about such things as geothermal dynamics and metal stress experiments that she has soaked up from her father. In fact, she and Dr. Quest might occasionally get into some debate over some esoteric thing and Jonny even knows what's going on. She also happens to be very good at savate. If she has to, she can handle herself in a tough situation. As this episode I'm currently working on goes, they start out not liking each other. In the new stories I'd like to see her in at least four of them, maybe even half of them, but not all of them."

Jessie and Jonny not getting along

Jessie with Hadji and Jonny

Jessie with Jonny and Hadji

Jessie gives Jonny a kiss on the cheek 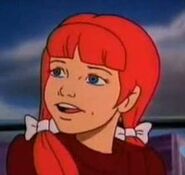