This page is for the character in The Real Adventures of Jonny Quest. For other versions of Jessie, see Jessie (disambiguation).

Jessica "Jessie" Bannon is a member of the Quest team and a friend to Jonny Quest and Hadji Singh. She is the only daughter of Race Bannon and Estella Velasquez; when she's not with the Quest team, she's with her mother, who's an archaeologist.

Jessie is a teenage girl with green eyes, red hair that goes past her shoulders, and fair skin. She has a slim athletic build.

Jessie is a year older and little more mature than Jonny. She is slightly more reluctant to go along with Jonny when it involves defying Dr. Quest or her father, but she is more adventurous than Hadji.

Jessie Bannon is Race Bannon's daughter by Estella Velasquez, and a good friend of Hadji Singh, Jonny Quest, and Dr. Benton Quest. She accompanies the Quest family on many of their adventures, providing another voice of intelligence in addition to Hadji's eastern approach and Jonny's impulsive resourcefulness. She identifies with Dr. Quest more than her father, and is eager to analyze new information and help in the course of Dr. Quest's phenomenology investigations. She's revealed in "Thoughtscape" to be very ambitious at heart, hoping to improve humanity through her dedicated effort and research.

She knows how to code and repair broken computers, drive a quest bike in Questworld, and ride a hoverboard.

In The Real Adventures of Jonny Quest comic book series, Jessie and her mother have a different origin story in issues five and seven; Jessie's mother is an unnamed acquaintance of Race who died years ago, and Jessie went on an adventure to find treasure with the Quest team before revealing her identity as Race's daughter.

In "The Haunted Sonata"

In "The Dark Mountain" 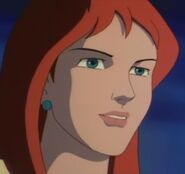 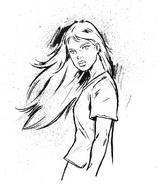