This article is about the standard continuity character. For other uses, see Jezebel Jade (disambiguation). But for the TV film Jonny's Golden Quest version, see Jade Kenyan-Bannon. 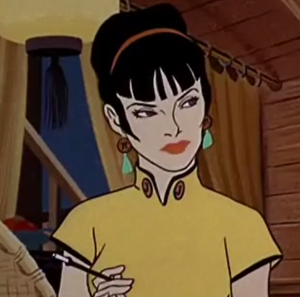 "Jezebel"[1] Jade is a mercenary for hire, entrepreneur, an ally of the Quest team, and a love interest/old flame of Race Bannon.

Jade is tough, courageous and driven, jumping into action at once when needed. She is also very confident, chiding Race Bannon for his (perceived) impoliteness[2] and openly demanding payment for her services. She remains calm and cool-headed while shooting at a wild animal in a jungle and threatens one of her contacts with a gun when he initially refuses to cooperate. She also mentions having "expensive tastes," probably referring to luxurious living standards.

She can use a firearm with great precision, drive various types of cars, and possibly deduce a man's real identity by a single kiss,[3] although it's debatable whether this skill could work with other men than Race Bannon.

She popped up in the jungle of Thailand, where she saved Jonny and Haji from a wild cat. Jonny recognises her and calls her by her first name, meaning the two must have met before. The boys immediately enlist her help and leave camp with her, showing that they trust her. Jade meets the Race Bannon impostor and their conversation implies that the two have been romantically involved in the past. When the real Race is found, Jade saves everyone by letting them escape in her helicopter, although she is not piloting it. Her parting remark that "there's only one Race Bannon," as well as the fact that she came personally to the jungle to warn him, seem to suggest she still has some feelings for him, although she still mentions she will charge him for her help.[3]

In another mission, Jade was presented as much more ambiguous. Race went off to find her on his own, initially thinking that she actually helped kidnap Dr Quest, and he made it clear he doesn't trust her and believes she'd do anything for money. Nevertheless, he seems to care about her safety, too. Jade ends up saving both Race and Dr Quest from Chu Sing Ling's armed guard. The episode ends with Race kissing her as thanks, and her returning the kiss.[2]

Jade is Race's old flame. There's a picture of her with Race, along with Dr. Quest, Jonny, and Hadji in the Quest Labs kitchen, and Race still has feelings for her. She helps Jonny, Hadji, Bandit, Tom, and Jerry when they come to Jade's Cafe Americain, her personal nightclub where she performs. She later arrives after their confrontation with Dr. Zin to help them escape.

Retrieved from "https://jonnyquest.fandom.com/wiki/Jade?oldid=8956"
Community content is available under CC-BY-SA unless otherwise noted.